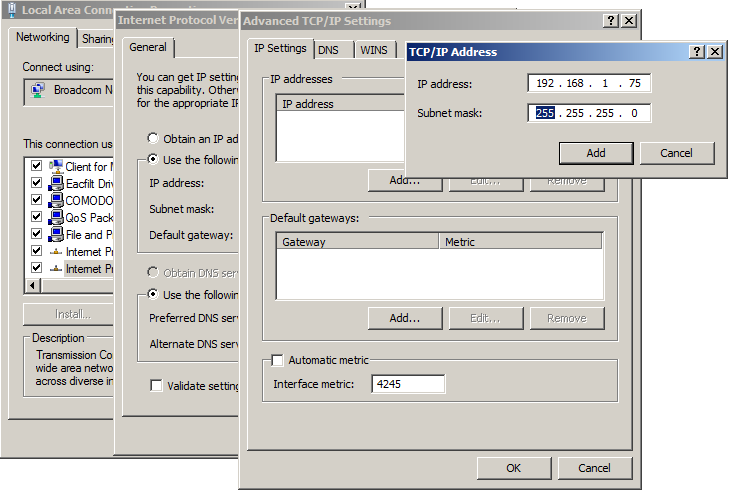 I am currently working on multiple projects which require me to connect my Windows 7 laptop to different networks in a day. A couple of these networks assign a dynamic IP to the system, when I connect to them, but one of them (Windows 2003 IPv4 Active Directory based) requires me to assign a static IP address to my machine to be able to communicate with the other systems on the network.

It has worked for me before on the same Win 7 machine, but this time, for some strange reason, the machine just decided to disobey me. No matter, how may times I set a static IP address, and all other settings properly, as soon as I close the Network Card’s Properties dialog after saving the settings, the IP address returned to an empty string. I could further verify this by running ipconfig from command line, which confirmed that the Network card, which I was trying to configure with a static IP, actually had the IP dynamically assigned. And this meant, that I was not able to ping and communicate with machines on the desired network.

Googling revealed some threads on Microsoft Technet forums, which suggested the issue could have been due to a recent Windows update. I tried suggestions on some of these threads, but nothing worked.

After many tries, I found another solution to the problem. Instead of trying to assign a static IP in the IPv4 properties dialog, I clicked the Advanced button on this dialog, and then the “Add” button to add an IP address and the subnet mask for the Network card, and then saved the settings. This time, Win 7 honored my instructions and the machine had a static IP, which I was able to verify with ipconfig and being able to communicate on the desired network.

Phew, a couple of hours of wasted productivity for such stupid networking issues.